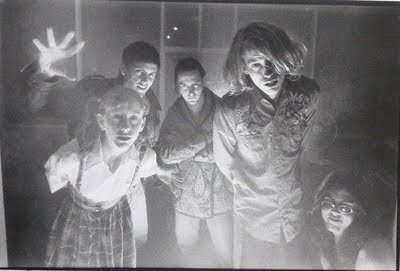 A musical favorite of mine since first hearing their instantly addictive, hardcore/dark psychedelia around 1986. The Butthole Surfers always deliver the artistic and entertainment goods that us weirdos are hungry for. The reunited 80s lineup (Gibby Haynes, Paul Leary, Jeff Pinkus, King Coffey and Teresa Taylor) returns to Boston with a show at the Paradise this Wednesday - September 30 and as a salute I've dug up this earlier MySpace blog full of vintage clips from the Butthole Surfers.

The following two clips are from a NYC cable access show in 1984, I think that's the year. Captures the band with the double drummer set-up that really is a special element of their sound. The tribal, pulsating beat matches perfectly with the acid soaked guitar skronk Paul Leary serves with Gibby Haynes howling goodness.


Another YouTube find, a student made film featuring
great live footage from the Butthole Surfers, circa 86/87.

The Decline of Western Civilization Part II: The Metal Years (1988) 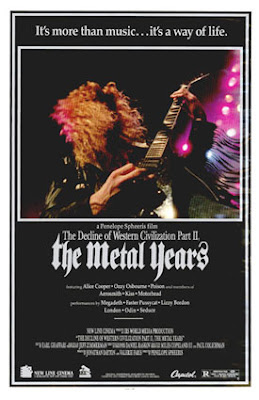 Penelope Spheeris followed up her 1981 doc on LA's punk scene by focusing on the heavy metal world in 1988 with The Metal Years. The interviews with Lemmy are priceless and he comes across as the only person in the movie I would want to go have beers with and shoot the shit. As with most musical genres, heavy metal is littered with tons of derivative and stupid ass bands and in this flick the moldy log of metal is kicked over to expose some rather creepy critters. Still as entertaining and watchable now as when I first saw it in the theaters back in 1988. 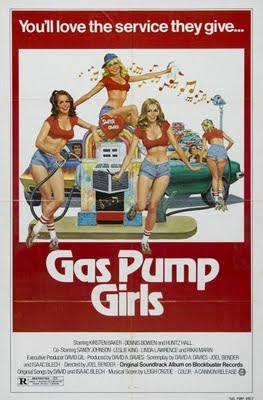 Stumbled across this 1979 teen sexploitation oddity on cable recently and it left me bemused and oddly or perhaps vaguely entertained. Gas Pump Girls features the genres prerequisite indgredients of t & a, goofy + raunchy humor and cartoony bad guys out to foil the fun times of some older beyond their allegedly "just graduated" from Hometown High School looking guys and gals trying to save Uncle Joe's service station. Early on in the movie, a character breaks into song for a onetime musical sideline and then it's back to the generic disco soundtrack - available at the time of the films release on Blockbuster Records.

Actor Ken Lerner co-stars as Peewee, a member of the Vultures motorcycle gang who turns from tough to tender. He has gone on to a prolific career in Hollywood with a notable turn as the school principal in an early season of Buffy the Vampire Slayer among his many credits. Light years away from his Dead End Kid days, an almost unrecognizable Huntz Hall plays the ailing gas station owner Uncle Joe. Screen bad guy Mike Mazurki and comedian Joe E. ("Oooh! Oooh!") Ross make a brief appearance as geriatric gangsters hired by the movie's heavy and owner of the rival service station, Mr. Friendly, to rub out the competition. We know Mr. Friendly is a really bad guy because he even has a framed picture of J. Edgar Hoover in his office. D'oh. 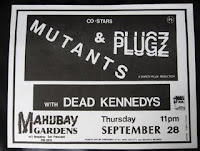 From Los Angeles, The Plugz were among the first Mexican/American punk bands. Fronted by Tito Lariva, they formed in the late 1970s and brought together traditional Mexican music with the sounds and attitude of punk rock. Their first single, "Mindless Contentment" featured backing vocals by Exene from X. Several of their songs were used in the 1984 film Repo Man. Most notable to myself is the song "Reel Ten" which plays at the film's conclusion. A sonic tribute to the esteemed work of Ennio Morricone, this track brings spaghetti western sounds to the forefront. Another cinematic use of Plugz music came about in 1985 when "Electrify Me" was used in the XXX feature New Wave Hookers, also notable for starring a then underage Traci Lords.

In early 1984 The Plugz hooked up with Bob Dylan and performed for a short time as his backing band, including a March 1984 appearance on Late Night with David Letterman where they performed three songs. Later in 1984 Tito Larriva, Tony Marsico, and Chalo Quintana of The Plugz welcomed guitarist Steven Hufsteter into their fold. They then changed their name to The Cruzados and the music took on a more reflective and blues influenced sound. Hufsteter was replaced by Marshall Rohner after one album and The Cruzados continued until disbanding in 1988. Around this time a slightly altered line-up performed in the knuckle-sploitation 1989 film Roadhouse.

The members all continued in music and Larriva went on to form the band Tito & Tarantula in 1992. Horror film fans should note that it is Tito & Tarantula who are the house band at the Titty Twister cantina in Robert Rodriguez's 1996 film From Dusk Till Dawn.


The Plugz "In The Wait" - New Wave Theater 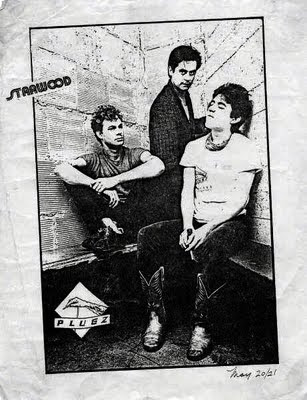 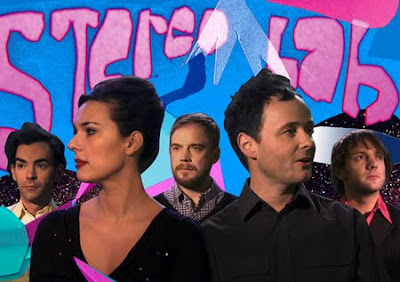 The clips below present Stereolab performing their percolating sounds at La Cigale in Paris during November 2008 in support of their recently released Chemical Chords record. 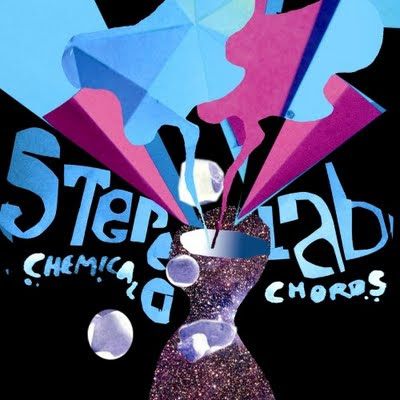 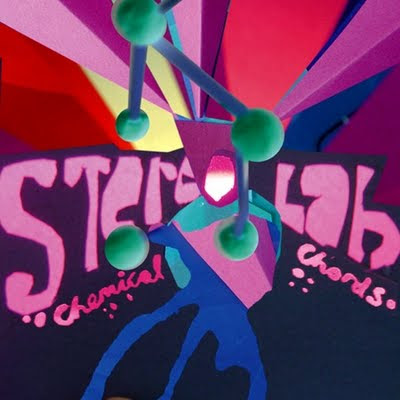 The music of the Louvin Brothers continues to enthrall and delight me with their incredible harmonies and always memorable originals and cover songs. Real life brothers Charlie and Ira's interpretation of an old English murder ballad "Knoxville Girl" was a big seller for them and garnered considerable attention; as did the song "If I Could Only Win Your Love." This number would later gain a new generation of fans in the late 60s when Gram Parsons covered it along with other songs from the Louvin Brothers.

Consider myself quite lucky to have had the opportunity to catch a live performance from Charlie Louvin at the tiny Club Passim in Harvard Square a few years ago and even purchased a personalized, autographed cd from the man himself. He still has an incredible amount of energy and verve for his playing and enthusiasm extended to the audience.


The following segment is taken from a 6 hour BBC series entitled the History of Country Music. I've viewed the segments on Bill Monroe and the Carter Family and all are well crafted and loving looks at the bedrock origins of country music - which is an era of c/w that is a favorite of the genre for me.

If I Could Only Win Your Love

Must You Throw Dirt In My Face

Os Mutantes are a longtime musical favorite of mine. I can't get enough of their totally unique sound which draws upon a rich spectrum of multiple influences and produced timeless and incredible music.

Their official website (www.mutantes.com) provides this biographical info for the band "Initially a group was formed in São Paulo in the 60’s, it had several different formations and names (Wooden Faces, Six Sided Rockers, O Konjunto, O'Seis) until it is consolidation as a trio, Sérgio Dias, Arnaldo Baptista e Rita Lee. They performed as Os Mutantes, at 1966, in a television show. Next year, they maded second place at the Record TV festival, performing with Gilberto Gil’s Domingo no Parque’. In 1968, they’ve recorded the classic LP called ‘Tropicália ou Panis et Circencis’ with Gil, Caetano Veloso, Tom Zé e Nara Leão. At the same year, they launched their first LP, with the hits ‘Bat Macumba’ (Gilberto Gil), ‘Panis et Circencis’ and ‘A Minha Menina’ (Jorge Ben). 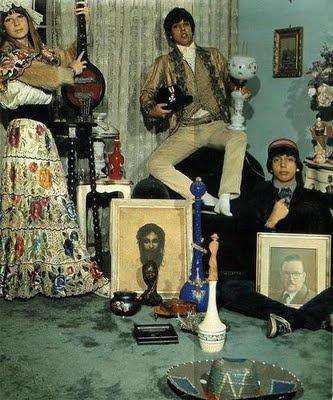 Os Mutantes were recognized as the most musically creative group with an attitude of debauchery and irreverence. They have played in France at 1969 and launched their second album. They participated in other festivals, performing with Caetano Veloso at 1968 in ‘É Proibido Proibir’ and performing solo with ‘Dom Quixote’ and ‘2001’, and at 1970 with ‘Ando Meio Desligado’.

The historic show ‘Planeta dos Mutantes’, held in 1969 at the Casa Grande Theatre, in Rio de Janeiro, have established the group on the innovative rock scene of brazilian music. In 1972, they have launched ‘Mutantes e Seus Cometas no País dos Baurets’, album with one of their greatest hits, ‘Balada do Louco’.." 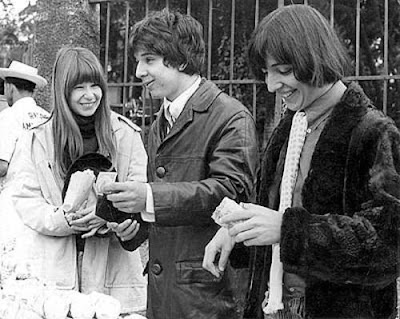 Since today is my 40th birthday, I thought I'd highlight Os Mutantes since tickets to their upcoming local appearance were part of my birthday treat to myself, along with a couple of pricey late 50s and early 60s Louvin Brothers records. Also seems fitting because the following clips are also 40 years old.

This footage comes from a 1969 (or is it 1970?) Brazilian television appearance from Os Mutantes and it's interesting to watch the audiences reaction to the Mutantes sound. Not too many folks seem into it and reactions range from puzzlement to disdain.


A Minha Menina - from their 1968 self titled debut record 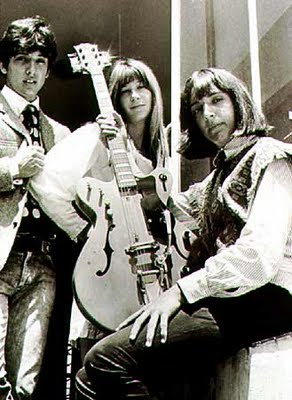 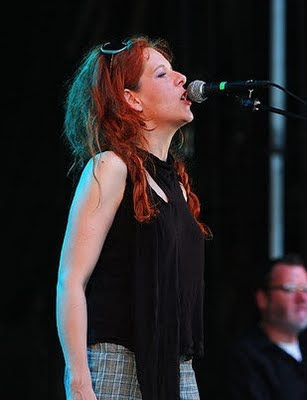 Here are some recent clips of favorite Neko Case from the All Points West Music and Arts Festival at Liberty State Park located in Jersey City, New Jersey.


People Got A Lotta Nerve


This Tornado Loves You 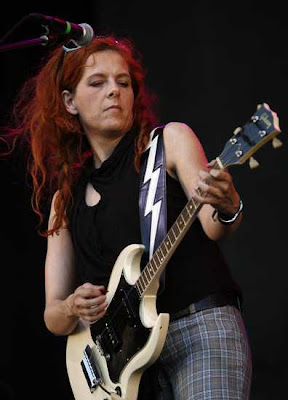 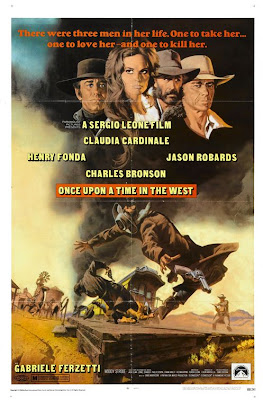 Recently re-watched this favorite. All of Sergio Leone's westerns are superb cinematic experiences and Once Upon A Time In The West (1968) is no exception.

The screenplay was written by Sergio Leone and Sergio Donati (a prolific and still active screenwriter; his other writing credits include The Big Gundown (1966), Duck, You Sucker aka A Fistful of Dynamite (1971) and Cry, Onion! aka Spaghetti Western from 1976) and story credit was given to Dario Argento, Bernardo Bertolucci and Sergio Leone.

A great deal of talent was also displayed on the screen. Henry Fonda played against his good guy screen image as the very nasty Frank. Claudia Cardinale, Jason Robards, Charles Bronson, Woody Strode, Keenan Wynn and the always appreciated Jack Elam also bring top notch performances and textured characterizations to the film. Rumor has it that Sergio Leone had initially intended for Clint Eastwood, Lee Van Cleef and Eli Wallach to reunite and play the three gunman at the film's begining; but scheduling all three actors for the shooting proved to be too difficult and the idea was abandoned. 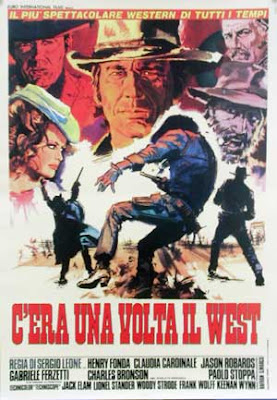 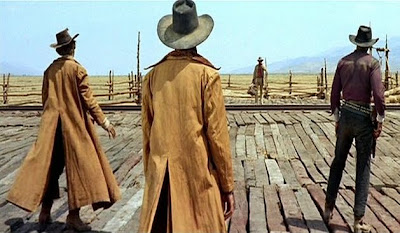 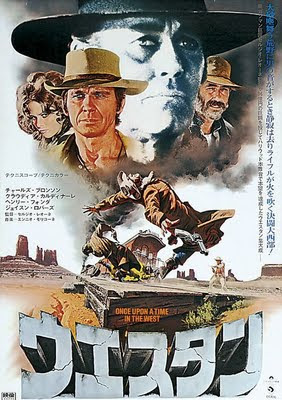