Sometimes called the Godfather of library production music, Alan Hawkshaw has been creating music for years and remains largely known for his commercial work as well as the musical groups the Mohawks and Rumplestiltskin. In multiple capacities (such as arranger or keyboard player) he has worked with artists such as Olivia Newton-John, Jane Birkin, Cliff Richard and Serge Gainsbourg.

The theme song for The Dave Allen at Large television program "Blarney Stoned" was the first of his tunes I became acquainted with when American PBS stations picked up that show for US broadcast. Often driven by his prominent keyboard or Hammond Organ playing, all of his work swings with a timeless elegance, is loaded with hip shaking hypnotic hooks and keeps drawing me back for repeated listens. Below is a small and random selection of Alan Hawkshaw's music. He is still writing, performing and maintains a website at www.alanhawkshaw.com


"Beat Me Til I'm Blue" with images from groovy movies


"Girl in a Sportscar"


"Get Ready Get Set Fly"

Chris Elliott's involvement with David Letterman's show produced an array of colorful characters on both NBC and CBS. For me, his crowning achievements on the show were often the short films created to fill time between the guests. 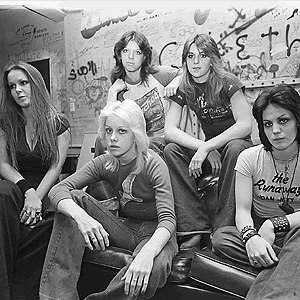 Hugely rocking and influential in equal doses, The Runaways are a sometimes overlooked gem of an American rock band that also counted fans in cutting edge punk outfits like the Sex Pistols and the Germs. Bringing together influences from genres such a heavy metal, glam, punk and rock to create a unique blend was their thing.

Unfortunately they were mainly disregarded by the US radio and music press as the latest gimmick concocted by rock impresario Kim Fowley (even though it was Sandy West and Joan Jett who first presented themselves to Fowley with their ideas and plans for an all girl band), but success came in larger measure in Europe and Japan.

The Runaways sound is a most up front, rocking affair and still stands up well today. They were fronted by the she-Bowie-esque Cherie Currie and gave prominence to the dual riffin' from Joan Jett on rhythm guitar and Lita Ford on lead guitar duties. The rhythm section was populated by bassist Micki Steele and drummer Sandy West. Cannot recommend the first Runaways record enough. 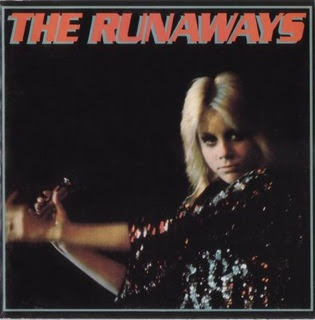 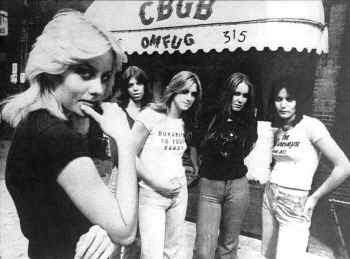 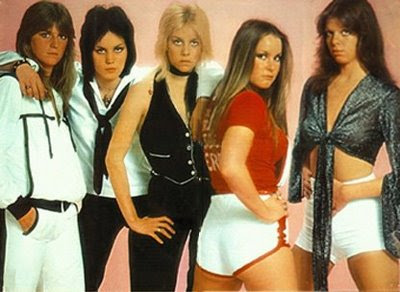 In April of 1987, the Butthole Surfers performed at the Riveria Night Club in Chicago supporting the just released record of dark psychedelic punk genius - Locust Abortion Technician. I'd heard about their way out live shows and been all over the Rembrandt Pussyhorse, Cream Corn and Psychic... Powerless... Another Mans Sac records; so I was keen on attending after learning of the gig. Wisconsin's Killdozer and Appliances SFB opened what remains quite possibly my favorite live performance ever.


My memories of that show are very similar to the footage below. The two drummers tribal pounding generated a thick and solid balance to the distorted vocals and perfectly shrieking guitar. I think their dancer was set up between the drummers at the Chicago set. Some of the background movies are the same. The gory mid 60s drivers ed movie Mechanized Death (which I had viewed just a few years earlier in my high school drivers ed class) played at both shows, along with a variety of other unsettling oddities. An insane amount of experiences for a rock show - the movies, sound machine, interpretive dancer and the most crucial element - the music combined with unforgettable results.


Big thanks to stereopaul1 for posting these clips on YouTube. Here's the Butthole Surfers bringing their beautiful madness to Bremen,Schlachthof on 14 August 1987.

You may not be familiar with The Screamers music, but their Gary Panter designed logo of the stylized spiky haired screamer is recognizable to many. Along with others such as the Germs and the Weirdos, the Screamers were standouts in the first wave of LA punk. For a combo consisting of two keyboards, a drummer and a singer; they were successful in generating a sound that was every bit as forceful and robust as their guitar centric peers.

One of the most startling facts about the Screamers is that they never recorded a properly released single or record, leaving only demos and videos in their musical wake. Their legacy also includes their influence on fellow musicians and artists. Jello Biafra (whose San Franciscan hardcore heavy hitters the Dead Kennedys played often with The Screamers early on) heaped grand praise on the band and in Don Letts 2005 film Punk: Attitude, Jello again highlights the Screamers impact on the DKs and describes them as one of the great unrecorded groups in the history of rock music.

They were fronted by Tomata du Plenty, an exciting and colorful fellow who spent time as a member of the San Francisco psychedelic drag troupe The Cockettes in the late 60s as well as being involved with proto-punk combos while living in Seattle in the early 70s, eventually forming The Tupperwares in 1975 with Tommy Gear. A move to LA in 1977 found the pair changing the name to The Screamers and hooking up with new members David Brown (often credited with providing the synth direction) and drummer K. K. Barrett.

The band gained quick notoriety in the burgeoning LA scene and was soon able to headline multiple night stands at flagship clubs such the The Masque, Whisky a Go Go and The Roxy. The band incorporated a theatrical element into their music and live performances with Tomata working the stage in a possessed frenzy of excitement. Video presentations often accompanied the shows. Prior to the MTV explosion, the bands love of video became apparent when they pressed the idea of their first album being released only on video. Would have been a hell of a thing if they could have made it happen.

Along with this blog, I've also posted additional footage of The Screamers at blogs.myspace.com/gotankgo.

Screamers - Give The Future A Break (Hail To The Chief)

This clip from 1957 highlights a reunion between Billie Holiday and tenor saxophonist Lester Young after several years of not working together. Her reaction to his solo is a touching tribute to their musical partnership. The rest of the backing combo is also populated by jazz heavy hitters such as Coleman Hawkins and Gerry Mulligan. Classic clip from '57 is followed by a few others from Billie Holiday.