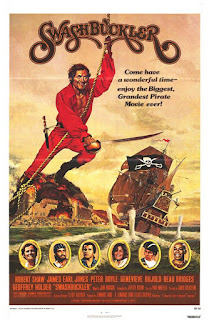 Directed by James Goldstone (The Gang That Couldn't Shoot Straight, Rollercoaster, When Time Ran Out...)1976s Swashbuckler was unfortunately a flop at the box office when originally released. It's not a perfect film, but by my estimation the first 15 minutes (not to mention the film in it's entirety) of the movie better captures the spirit and excitement of The Pirates of the Caribbean ride than what's found in the recent big budget, cgi bloat-fests bearing the rides name.

Filmed in Mexico, the set pieces are incredible and the action keeps coming at a fairly steady pace. The cast is loaded with great actors. Fresh from Jaws, Robert Shaw looks to be having a blast as the pirates leader, James Earl Jones is his often shirtless right hand man, and a bewigged Peter Boyle is the corrupt and evil governor. Also on hand are: Geneviève Bujold, Beau Bridges, Geoffrey Holder, Avery Schreiber, Anjelica Huston, Tom Clancy, and a favorite character actor of mine, Sid Haig.